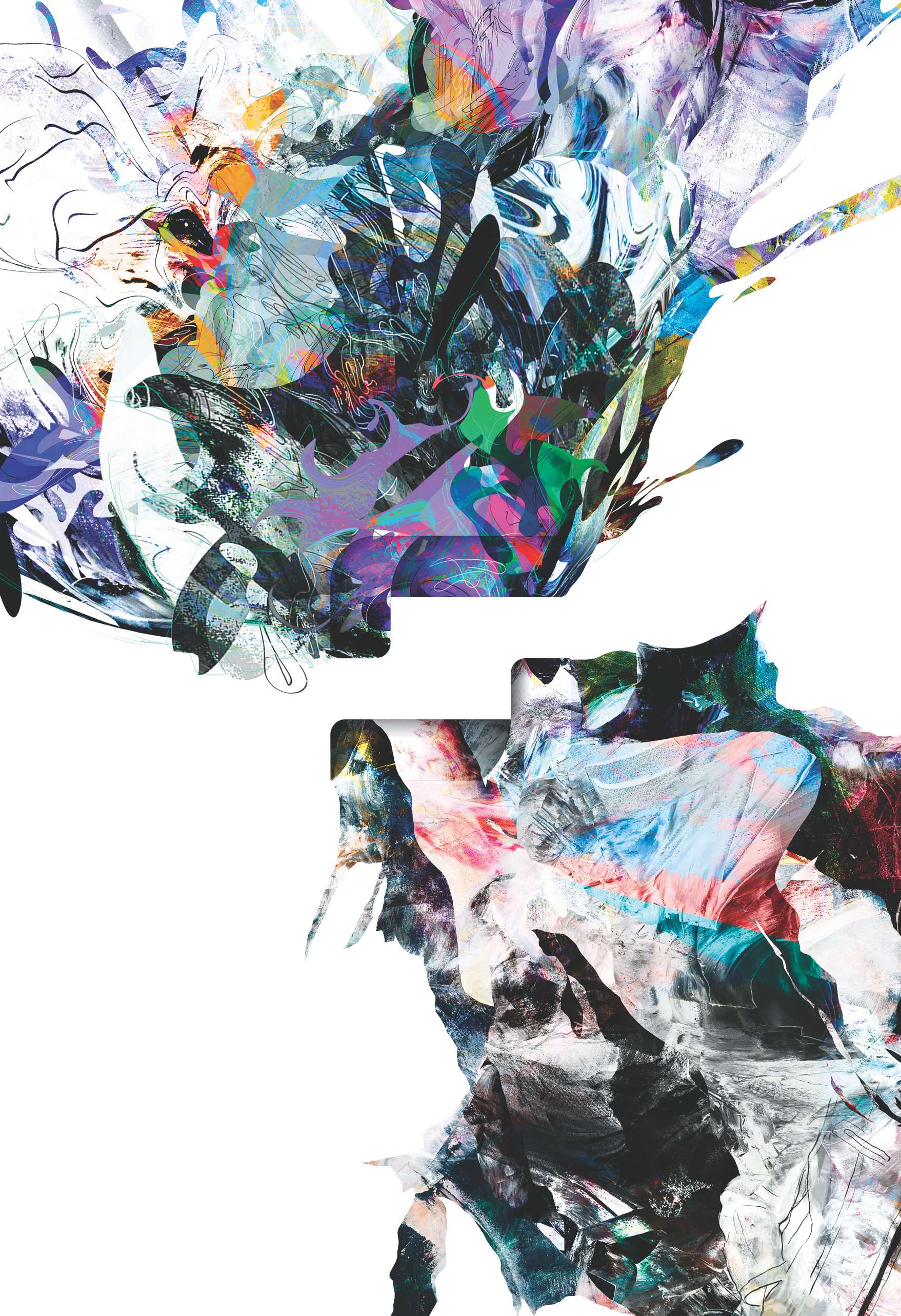 Focus21 co-creates digital platforms with purpose. Focus21 is a custom software company that was founded in 2012 with offices based in Kitchener, Ontario.

A co-discovery session is about understanding the client organization and the context of the problem details from a variety of stakeholder perspectives. During this session, we conduct activities to build our understanding of business stakeholders, users or customer needs and goals.

Much of the work I completed at Focus21 is unable to be shown to the general public. Due to that fact, I will be using general terms that mention no client by name.

Co-Discovery for a Startup Founder

My first exposure to the discovery phase, and more specifically co-discovery sessions, was actively organizing and planning the agenda with the Focus21 design team. Throughout this planning process, we determined what information must be gathered, from which stakeholders, and through what methods. The design lead, Filip Jadczak, had previously led these sessions, and we began to assemble a list of activities from a variety of resources such as Gamestorming and the Lean UX Book. Some of the activities we selected to run during my first experience were Proto Personas, User Journey Mapping and the Feature Hypothesis Chart. These provided a foundation for our final deliverables such as the personas, an information architecture, workflow diagrams and wireframes. 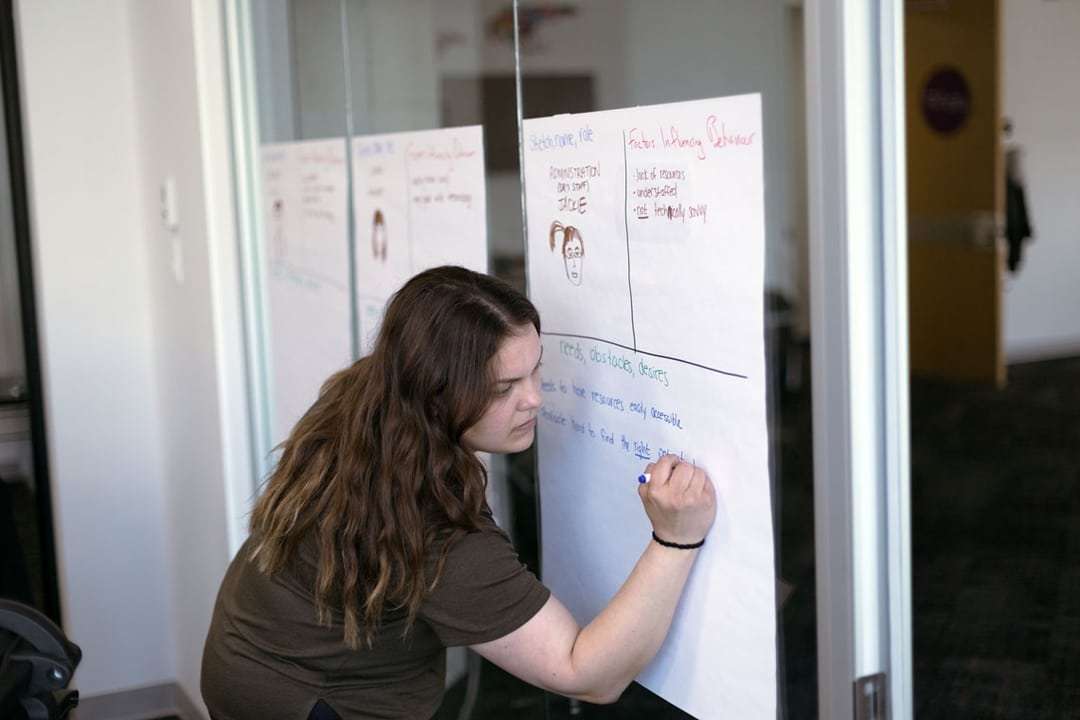 At the end of the session, we clearly defined to the client what to expect as outcomes and deliverables. This particular client was an entrepreneur with a new startup idea seeking potential investors and business partners. We provided wireframes and working prototypes of the various user interfaces required for the idea. The founder of the startup found these extremely valuable when communicating the concept to get investor buy-in.

In past co-discovery engagements, Focus21 would provide the deliverables often accompanied by little written content. We identified that the co-discovery activity diagrams were not a sufficient deliverable without proper context. I took the initiative to create a Focus21 branded template to reuse for future co-discovery sessions to aid in the transfer of information. Our talented UX intern, Krisika Suthan created most of the diagrams for this client and used my template to document the context around them. The design team then reconstructed the activity outcomes in the form of visual diagrams accompanied by this written report.

We learned from this experience that the supporting documentation and report was helpful to both the client and Focus21. The client is able to reflect on the activities we conducted for use throughout the evolution of the concept and product idea. Since this client session, a combined report with visual diagrams has been a standard deliverable for Focus21 co-discovery.

Co-Discovery for a Large Organization

One of the most rewarding co-discovery sessions was for client with over 700 employees and users across Canada who rely on their website on a daily basis. I had the opportunity to co-lead a co-discovery session at the client’s offices in Toronto with stakeholders who had flown in from offices around Canada.

We dove deep into the client’s stated problem at the session, learning from stakeholder perspectives at all levels of the organization. Some of the activities we selected for this particular session were the Start, Stop, Continue, Prune the Future, the Stakeholder Analysis, Flip It, and the History Map.

After this two-day session completed, we began our process of creating diagrams and reports for each activity to help guide future decision making. I wrote a large portion of the accompanying report for the final deliverables and completed roughly half of the visual diagrams along with another designer, Seul Lee.

Part of the requirements for the Focus21 discovery for the client was to complete user interviews with people across Canada. For this project, I was responsible for the planning, coordination, facilitation, and final reporting of such interviews. I worked with the client to outline hypotheses and questions based on what was learned during the initial co-discovery session to test our initial assumptions. I delivered this information in the format of a user research plan, which went through multiple iterations before beginning the interview phase.

I created a short list of ideal candidate qualities for each user group, which the client was responsible for selecting. Once we had a list of twelve interested participants in total with representation from each user group, I began to reach out to each one to schedule time using a tool called Calendly. During a two-week period, I interviewed all twelve participants using Zoom for video call recording, upon participant consent. After each interview, I documented their responses in a spreadsheet matrix to uncover any patterns across each user group.

Once all twelve interviews were documented, I briefed the design team and began to compare our findings to the initial assumptions. I then compiled all of this information, the co-discovery deliverables, our initial user research plan, and the interview findings into a report for the client.

In addition to external client-facing co-discovery sessions, Focus21 ran internal co-discovery sessions for internal projects. During my time at Focus21, I was able to participate in these sessions for the redesign and redevelopment of the Focus21.io website, the development of a new area of business, the Focus21 UX Lab, and Focus21 marketing initiatives.

For the Focus21 website and marketing initiatives, Filip and I developed the agenda and facilitated the internal session. We completed proto personas to refocus on who the decision makers are when it comes to finding a custom software partner. I completed the digital conversion of the paper proto-personas to sketch diagrams which can be seen below.

We then handed the proto personas off to our marketing partner, Traffic Soda, who was able to refer to these when developing ad campaigns across LinkedIn, Facebook and Twitter.

These have been rewarding experiences that are invaluable to my career, not only because of the findings of the research but because of the impact on my personal development. I am confident in preparing, coordinating, and leading a workshop or information-gathering session, and I am passionate about connecting with the people experiencing challenges using digital products. 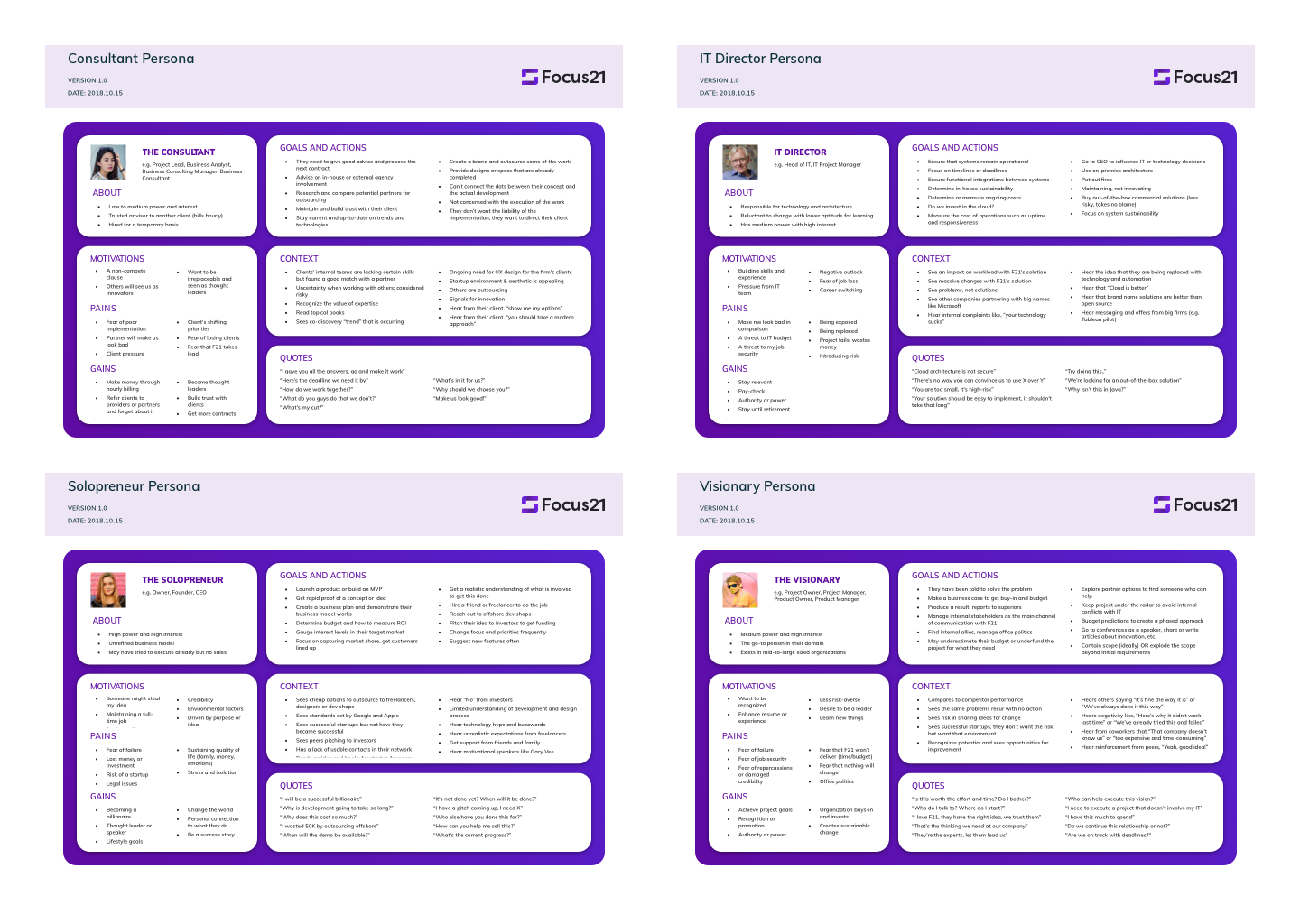 I coordinated the agenda and logistics with teammates for multiple sessions.

I led multiple co-discovery sessions to guide participants through each activity.

I worked with the project stakeholders and design team to understand the problem.

I collaborated with the team to analyze the session outcomes to deliver a final project report.

A great book for meeting activities.

To manage Sketch file versions as a team.

A fantastic resource for UX processes.

To schedule meetings and user interviews.

To create and share reports, presentations and co-discovery deliverables.

To create diagrams from session activities.

To facilitate and record user interviews.

Get in touch with me.